Recently my sister sent me a box of spices. It arrived neatly packaged, six jars, all in their separate compartments. I resolved to construct six dishes featuring at least one of the aromatics playing a central role. So far I’ve managed two, one of which I will proceed to document here, the other at a future uncertain time.

One of the spices, or to be more accurate, spice blend, was ras-el-hanout. Perhaps appropriate she should send me a Moroccan mix as we visited this country together when she was still at University and myself a callow youth of fifteen or so. I remember basically nothing about what we ate. We must have eaten something. I do know that I wore the same clothes, unchanged, for four consecutive days.

The trip was memorable for many reasons. Firstly there was the nightmarish crossing from the southern tip of Spain, in a rolling wooden tub of a ferry with water sloshing through the cabins and the sea reaching up and over the portholes at which we were sitting, transfixed with terror, the fear allaying any possible seasickness. Then there was the midnight arrival in Tangiers and the way we allowed ourselves, weary from the journey, to be hustled by a chap who took us to eat and then found us a hostel of some kind. I remember the ornate, high ceilings and the sounds of doors opening and closing through the night, the sound of women giggling. Then there was the English fellow, tall I recall with a moustache, who’d latched onto our party (with us were three of my sister’s Uni friends) on the ferry. John? Peter? Anyway, he became something of a pest, always showing up somehow and dogging us. When we left Tangiers for Fez we lost him – but I also lost my Walkman on that train, snatched by a dashing child as we pulled away from a station. The song playing at the time was this. There wasn’t any time (or money) to get to Marrakesh as we’d planned and we rushed back to Tangiers to find our return vessel a rather more luxurious liner. Hungry, broke, bewildered, the captain took pity on us in his cabin, feeding us fruit.

Also included in the package was something called Perfect Salt, a bird’s eye of which I include below, the idea perhaps to make the mineral even more ‘perfect’ by adding things to it. In the image you can spot flecks of pepper and mixed herbs of which marjoram and oregano are the most fragrant. So far I’ve used it to season virtually everything. 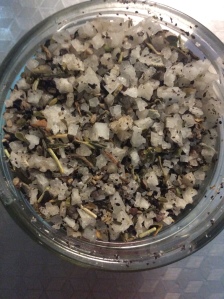 Apparently the word kofta is the noun form of the verb meaning to grind, or pound. So ground meat, made into a meatball. It’s not hip though to talk of lamb meatballs, never mind rissoles…..It’s always lamb kofta. In any case, whatever you want to call them, these are what I made this time. The ras el hanout would go into the aubergine accompaniment.

There’s something wonderful about the way one has to mix the lamb mixture together then toss it into jelly-like balls which then sit in a momentary state of quiver. I combined lamb mince with one beaten egg, chopped coriander, zest of a lime and a rather delicious gently fry of onions and crushed cumin seeds, as well as the aforementioned sodium compound –  all played from hand to hand until spherical then left to cool in the fridge. 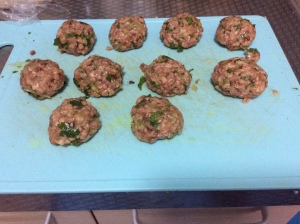 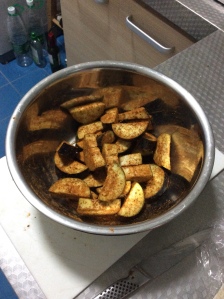 Meanwhile the aubergines were chunked and given a very generous dousing of the spice blend (almost too generous, as it happened). On another day I might have salted the veg first to get rid of excess moisture but I was planning a hot treatment for them this time. Into the sizzling pan they went, spitting and greedily hoovering up the oil. Fabulous aroma. Once they’d coloured almost to the point of burning I turned the heat down and threw in a few chopped cherry-like tomatoes, leaving the two things to create a kind of wonderful North African garden fusion.

In the other pan the kofta were sputtering peacefully. As with frittata, it pays I think to set the heat quite low to ensure a gooey, sticky seal on the meat, turning the globules only once. This way meant about 12-15 minutes on either side although I paid no attention at all to how long anything took to cook.

To finish I baked another flatbread – different recipe this with fennel and coriander seeds, and that slightly citrus tang came through – and mixed up some Greek-style yoghurt with a squeeze of lime. I’d been hoping to buy some mint at Twin’s shop but they only had parsley – which came in handy as a sprinkling over the aubergine mixture – and thyme, and something else, neither of which I needed this time.

Probably the best thing I’ve made for a long time. Full of flavour – helped no doubt by the different condiments, the salt being, indeed, a perfect seasoning, although the zest was lost (not that it mattered) – and just as good cold the next day when I ate lunch in front of the kitchen window in the midday sun, straight from the pan with a can or two of Japanese lager.

As for my memory of the holiday, I can look back with fondness, through sunset eyes perhaps. It was my first time outside Europe, first proper adventure abroad, first glimpse of what can be done given the right attitude. It’s taken me quite a long time to let myself go in this respect, to give myself up to new experiences without worrying if I was doing the right thing, whatever that is….When I got back to the UK, my mother picked me up from the airport. At that time I was aloof as a teenager, backward in coming forward, but she said for the entire journey from London to Somerset I talked non-stop, out of excitement from the experience. Here, finally, that narrative continues. 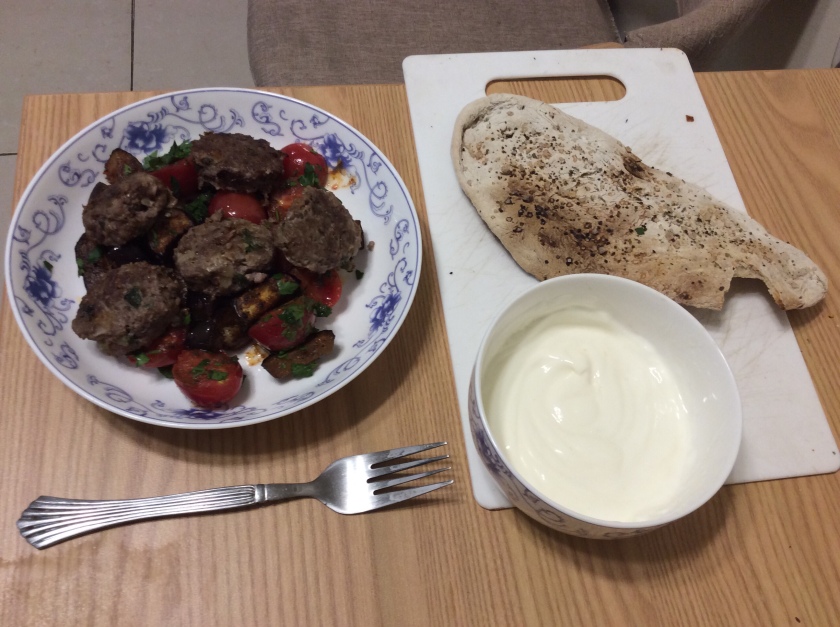 3 thoughts on “Spice of life”